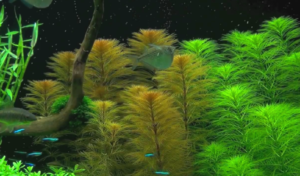 Provenance and habitat: This plant comes from the family Haloragaceae and is widespread in South America and the USA, the name Myriophyllum comes from the Greek: Myriòs means “thousands”, while phyllum means “leaf”. The dimensions and colors are variable from variety to variety; we can only say that all Myrios are characterized by segmented leaves and vertical growth that reach 30/40 cm in height and almost always on a single stem. It is a medium or background plant depending on the tank in which it is to be used, and has the characteristic of filling the space since it has a very voluminous effect. It adapts to different lighting conditions, changing its appearance and its speed of growth, it develops better in soft and rather acid waters. If the ph drops below 6.5 it absorbs large amounts of nutrients. It is possible to grow it even in slightly alkaline waters, but not with the same results, we suggest a temperature never below 20 ° Celsius. This kind of plant can be indicated as a good adversary of algae for its fast growth and characterized by a strong demand for nutrients. 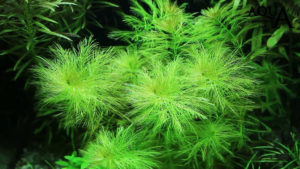 MYRIOPHYLLUM MATOGROSSENSE: The name from which it derives refers to Mato Grosso, but it is widespread throughout western Brazil, Perù and Ecuador in Colombia and Bolivia. It is definitely the most suitable Myriophyllum for the Amazonic aquarium, for many reasons linked to chemical and physical parameters. After all, it is there that has been living for milions of years, and we know that it is easier to support Nature rather than fight it. The Myriophyllum Mattogrossense has been confused for at least 25 years with the Tuberculatum, which appeared to be a red variant. In reality, these are two distinct species, living over 10,000 km away. It grows very tall, with leaves that reach even 5 cm in length. The color varies from dark green to a pale red, depending on the intensity of light, but the phenomenon affects only the most exposed leaves. 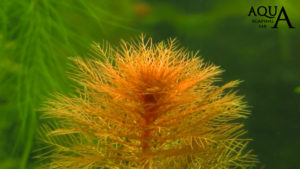 MYRIOPHYLLUM SCABRATUM or PINNATUM: Although it is now present almost everywhere like North America, Australia and Mediterranean Europe, the Pinnatum is native to Florida, where it is still present today. The cultivation of Myriophyllum, in the aquarium, began precisely from this species in the 50s of the 20th century. The stem tends to store large quantities of iron, whose concentration is inconsistent in its natural habitat. For this reason, its color can change from dark green to bright red, precisely based on the abundance of iron in the water. Among all the varieties of Myriophyllum is the easiest to grow in the aquarium. Like many plants with fine leaves, it needs clean water with no suspended debris, since lying on the leaves could interfere with the chlorophyll photosynthesis, the light must be intense and abundant. It prefers cold water then high temperatures and produces numerous side jets, which can be removed and replanted by producing new plants.

Reproduction and multiplication: In nature reproduces with fruits and seeds, in the aquarium instead we can multiply it by cutting, then making a clean cut roughly in the middle of the stem and then replanting it in groups of 3 – 4 at a distance of at least 4 -5 cm from the others to allow total exposure to light even in the lower part of the plant. 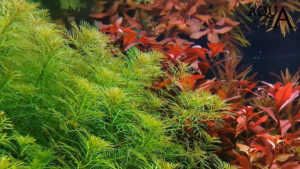 Fertilizer and recommended substrate: Myriophyllum is an aquatic plant absolutely “hungry” for quantity, but also for variety of nutrients. This plants need a lot and everything; there is no nutritive element that is not essential for their growth. It feeds on nitrates but also needs phosphates, for those who have always worried about it, with these plants it will have to stop doing it, maybe it will have to add them artificially. In addition to the need for lots of light, it also needs the administration of CO2. They usually absorb nutrients directly from the water, and use the roots only to anchor mechanically. The Myriophyllum can therefore live on sand or inert gravel, it does not need absolute substrates or fertile soils but if it finds nutrients in the soil it certainly exploits them.