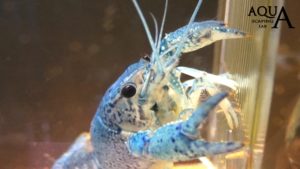 Name and family: Cherax Crayfish or Blue Lobster, and all the species of f Parastacidae family , derive from New Guinea, Indonesia and Australia.

Feature and behavior: Cherax is a freshwater shrimp, has an exoskeleton that in nature is not very colored but in breeding varies, from green water, to blue and bright blue, and depending on the species, orange, brown and violet. It has a body with 10 legs, 2 of which are equipped with powerful claws that it uses to prey and bring food to the mouth positioned frontally. When necessary, it can also move around swimming and use its powerful tail, the eyes are black and have a wide view, besides it is equipped with 6 antennas. The Cherax species we know are many but the most famous and used in home aquariums are:

– Cherax quadricarinatus, has a bright blue color and comes from Australia. 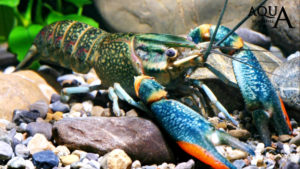 – Cherax (Astaconephrops) Pulcher, has an iridescent color from blue to purple to pink and comes from Indonesia.

– Cherax Peknyi, has a dark brown or black color with yellow or white reflections, derives from the New Guinea. 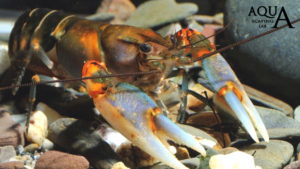 – Cherax Holthuisi Orange, has a bright orange color and comes from New Guinea. 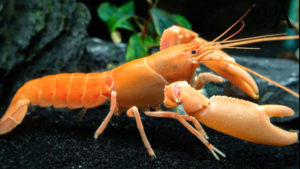 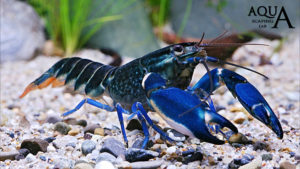 – Cherax Destructor, has a light blue color and comes from Australia. 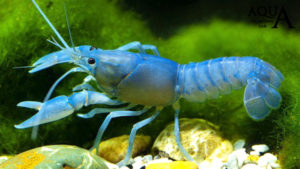 – Cherax Tenuimanus, has a dark blue color, sometimes black or dark brown, comes from the rivers of Australia. 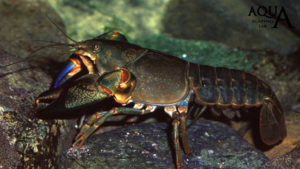 Fishes’s coexistence: The Cherax, like many species of freshwater crayfish, live in streams with not very strong currents, with a sandy and rocky bottom that they use to hide and hide. In nature it can grow up to 20 cm so we recommend 50 liters for one, otherwise it could develop badly, or even collide with other similar or fish that invade areas of its level. 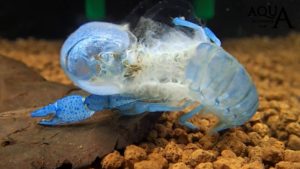 This shrimp is extremely predatory and territorial, with their claws with teeth, in a short time they are able to grab a fish, cut it and bring it to the mouth. Therefore it is advisable to avoid cohabitation with small fishes such as neon, caracidae and other small crustaceans. Only if you have tanks equipped with a lot of water liters, from 250 and up you can insert some fish and crustacean fast and durable. 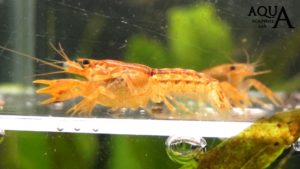 Regarding the setting up of the pool that must host it, we recommend a large number of stones and a considerable layer of sand, it is absolutely not suitable for aquascaping preparations treated in detail as it will spend most of the time digging, moving stones and cut the stems of the plants to make the burrows and hiding places. If you intend to raise one or more, do it in aquariums with lids, as they can easily climb the walls and get out of the tank. 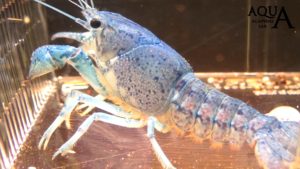 Sexual dimorphism and reproduction: The difference between male and female can be noticed by two details. The male, starting from the tail near the paws, has two small growths, while the female at the third leg has two small holes, moreover the male specimens have claws more developed and colored than the female instead, has more long-limbed claws. The latter also has a more developed abdomen, to contain eggs. The reproduction takes place by means of the fertilization of the female’s eggs by the male, even if it is an oviparous animal, the eggs are kept in the belly of the female who will oxygenate them and make them develop, the little new-born crayfish will already be self-sufficient and they will seek hiding places.

Feeding and mantenance: TheCherax shrimp is an omnivorous and predator, you can provide frozen food such as mosquito larvae, small pieces of frozen fish or small shrimps, blanched vegetables, leaves or legumes. If you want to choice a dry food there are feeds in pellets suitable for shrimps.