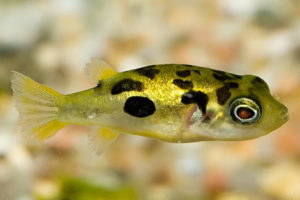 It has an ovaloid shape, rounded on the sides, on the back and on the belly, presents a mantle devoid of scales, of yellow-green color, with black spots, it possesses transparent fins and a mouth like a beak, formed by the 2 fusion teeth of each jaw (hence Tetraodon, four teeth). It is one of the few fish that seems to wink or close your eyes, that adds charm and a most intelligent expression to what is already.
He lives in the wild in fresh water and its life expectancy coming up to 5-8 years, the ability to swell but it is a defense mechanism that is not recommended selection, because it will cause severe stress, if you swell air for example in the transfer from one tank to another, it is most likely to die.

Nano Pufferfish, being small in size, they can become prey for larger fish but are also quite aggressive, so not suitable for community tanks. He ‘a very lively fish, curious and active, loves to explore every corner of the aquarium and can bite the fins and scales of other fish, of which it feeds. The only items that can go in agreement are small cleaners as Otocinclus, shrimp such as Caridina, or specimens of its own species, so we recommend the purchase of at least 4/5 specimens.
His muscular tissues and the viscera are extremely toxic (if ingested). Several species are among the most poisonous vertebrates in the world, because their internal organs, in particular liver and gonads, contain lethal amount of a substance known as tetrodotoxin. The tub to breed a specimen must be at least 60 liters laid down in a rich setting of rocks or wood and greatly appreciate the shelters provided by the vegetation, they can not withstand strong currents and too much light. It ‘s very sensitive to the presence of nitrites and nitrates must therefore be a good filtration system and regular partial water changes. We recommend the ‘purchase of 4/5 specimens.

There isn” t very sexual dimorphism between the two sexes, if not for a marked dark longitudinal line that passes on the male belly. It ‘an egg-laying fish then external fertilization occurs, the reproduction is difficult in captivity’ and the little ones after a few days can feed on brine shrimp.

The Nano Pufferfish is carnivorous in nature and eats molluscs, crustaceans and plant debris. As with every ball you must provide mosquito larvae, moths, bloodworms or fresh food and supplement their diet with snails and clams in their shells, in order to prevent excessive growth of teeth, which grow continuously and can become a problem. It is recommended dry food.