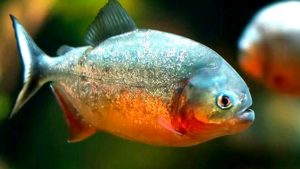 The body is very high and compressed laterally; along the back runs a crest that connects to the first dorsal fin, while the second is generally very small. The scales are small, the color varies according to the species, from opaque green to blackish shades to silvery and golden tones, it has a color that ranges from red to orange yellow, to the belly and to the area of the gills, which changes Depending on the power supply. It’s fast and has powerful muscles, it can move very fast. It is very aggressive, but at the same time timid, so fussy and a little dodgy. The most distinctive feature of the species is no doubt the mouth, like a tagliola. The lower jaw, very pronounced, is endowed with a row of large triangular, very sharp teeth that coincide with those in the upper jaw. This structure, together with the powerful jaw muscles, makes the piranha mouth a very efficient tool, able to sharply cut meat bites from the prey. It is not suitable for aquariums set up, planted or cared for in details as it will move the furnishings, eat the plants and the other “roommates”. 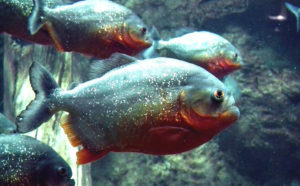 Community fish, in nature live in sheep weighing more than 100, and in theory it should coexist with 4/5 specimens in the aquarium, it is advisable to keep the ratio of 100 liters per each specimen. The only compatible fish are other species of herbivorous Pirana or Arowana or black bass, of course in very large aquariums.
It does not attack man except for defense when he feels threatened.

There is no difference between male and female, you can see only in reproduction, is an oviparous fish, so the fecondation is external.

Happiness but mainly carnivore. The piranhas are voracious predators with very appetite and they feed on aquatic invertebrates, small fish such as guppy, amphibians, pieces of carcasses of dead animals in the water. Although he loves beef, liver heart, it is advised not to administer them for the likelihood of bacterial presence. It is therefore recommended to dry in the form of granules or stick. If there are plants in the aquarium you will most likely see them slowly disappearing. 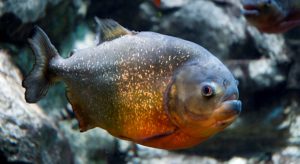